If number of searches were an indicator for gauging the popularity of a drink between Tea, Coffee, Beer and Wine then who wins the contest?

Let us analyze who wins the popularity contest by comparing the number of searches for each of the terms.

Data collection method: Each of the keywords Tea, Coffee, Beer and Wine were used with Google Trends to extract the weekly data and then plotted as below. Year 2015 is excluded due to partial year.

Which drink is gaining popularity and which is losing?

A simple group bar chart trended over years should give a clear picture for the winners and losers. 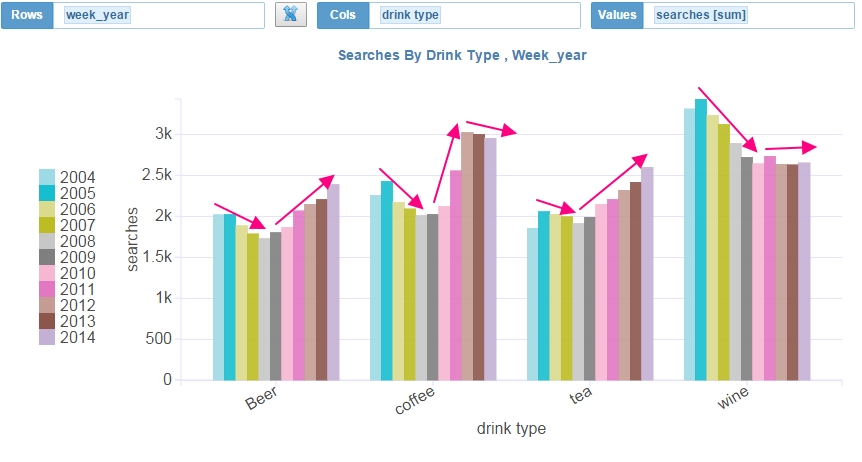 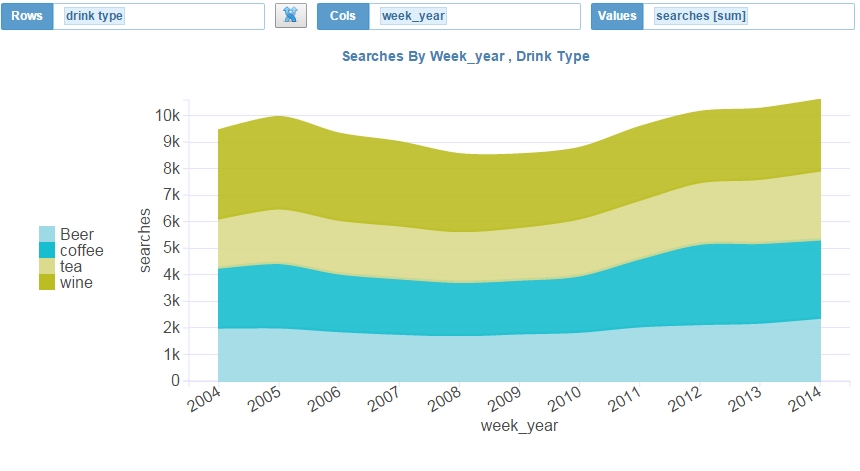 There was a dip in the overall popularity of the four drinks as seen by the trough between years 2007 through 2011.

Interestingly all the peaks on the above chart occur during the 4th quarter of every year.

Let us zoom in and see it by the month.

Interestingly, we see there is a peak for roughly every 1 or 2 months interval.

And finally the searches by each week

Data Visualizer and Dashboard Application
40% Off Get it Now
SALE
This is the best dashboard software for its price. One good thing we did was to hire their consulting services to build few dashboard prototypes and provide some quick dashboard training.
- Terry Seal, IL
We evaluated Xcelsius and Qlikview and the cost for organization to implement dashboards was quoted over 10,000 USD. For fraction of the above quoted price, we were able to buy the licenses for the web based dashboard software and get some free training. This is truly a dashboard software for small businesses like us.
IT Manager of a Trucking company, OH
PrevReddit 10 year growth analysis and visualization
NextList of acquisitions by Microsoft – a data journeyNext
Build your Dashboard now